Starting December 2018 Zanzibar is offering a completely new walking experience that takes you from the heavenly Carolus Borromeüs church in no time to the dark vaults of the “ruien”.

You start off with an exploration of the magnificent jesuits’ church, including a visit to the highly decorated baroque Houtappel chapel. Then you go down to the crypts of the church and then the guide takes you to the sacristy from where you reach the cellar. And this cellar, for centuries has had a passage to the “ruien”, the old canals of the city, that at the onset served as a defensive moat, later as a means of transportation and afterwards as a sewage system. 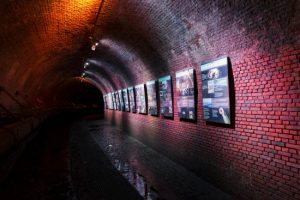 Once a door was installed. To what purpose, is still a mystery. Many a strong tale is told, but not once of them stands up to a bit of scrutiny, not even the one that says that the priests took that road to go on a mission to ‘convert’ the girls working in the nearby red light quarter. As time went on and more and more canals were covered, and more and more stench built up in the canals, it was once decided to remove the door and brick up the passageway.

Nowadays all sewage water, wether it be household water or rainwater, is held in tubes. Stench within the canal system therefore is very low, so the idea grew to open up the door again and allow visitors, in the company of a guide, to visit a part of the Antwerp underground. Just like the standard ruien walks, this tour also ends in the Keistraat, at the entrance to the red light quarter.

More practical information can be found on the website of the Ruihuis.