Most tourists concentrate on the historical city centre. I’m not saying that this area isn’t worth visiting, on the contrary, but in that way they miss a great number of interesting places, like e.g. the Middelheimpark. This park is situated on the south side of the city. There’s plenty of parking space in the area and lines 21 and 32 have a stop at the nearby Middelheim clinic.

In the sixteenth century well-to-do merchants of Antwerp started to build summer residences in the area around the town. The fields and meadows were quickly transformed into gardens and parks. When the city population exploded at the end of the nineteenth century, the city succeeded in buying a large area south of the city and decided to save it from the building craze that was happening in the rest of the city outskirts. In that way they created a majestic surrounding where people from the city could and can still find a little bit of rest in nature.

In 1950 mayor Lode Craeybeckx decided to organise an exhibition of present-day sculptures in his town, and it was decided the exhibition would take place in open air, in the park called Middelheim. One of the artists he had invited, Zadkine, came with the idea to organise such an exhibition every two years, 20 editions of this ‘Middelheim Biënnale’ were held in the odd years, to complement the Venetian biannual that was held in the even years. The last one was organised in 1990, not in the least because the success was rapidly declining. After that all energy went into the 1993 project: in that year Antwerp became the Cultural Capital of Europe, and of course the open air museum also took part in the events. Ever since then thematic exhibitions were held on the Middelheim grounds, practically every year. As part of the Rubens Inspires project in 2018, the Middelheim museum organised a successful exhibition under the title Experience Traps. 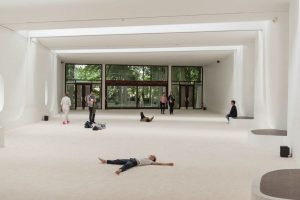 In the mean time the permanent collection of sculptures had grown to over 60 works of art spread over some 30 ha. The sculptures cover the era from Rodin up to the present day.

This park and the museum can be visited for free every day but Monday. Opening times depend on the time of year, so be sure to check the website.