A bar with a touch of comedy and drama

A bar with a touch of comedy and drama

When you enter the ‘Duifkens’ on the Graanmarkt, one of the first things you’ll notice is the long line of black and white pictures that cover the wall. All of them actors of the neighbouring Bourla theater and all of them regular customer of the bar. And the actors still do come to the ‘Duifkens’. Everything in the bar breathes theater, drama and comedy. Even the statue in front has to do with drama, but that’s another story. Just like the story of the Graanmarkt.

The building the ‘Duifkens’ is situated in, is one of the three remaining original houses on the Graanmarkt, and they date back to mid 16th century. All of the other 16th century houses have been demolished and replaced by huge 19th century office buildings for banks and trading houses.

When it is hot enough almost half of the Graanmarkt is turned into a terrace, as can be seen in the picture. And when you’re there, don’t forget to taste some of the local beers like De Koninck (just ask for a ‘Bolleke’) or a Triple d’Anvers.

The bar opens at 11:00 am and is open till midnight, except Fridays and Saturdays when the official closing time is 3:00 am. On Sundays the bar remains closed, and bear in mind that on Saturdays the Graanmarkt will be crowded as a street market is going on until 4:00 pm, a market were fruit, vegetables, meat, fish, … from all over the world are sold. The locals call it ‘Vreemdelingenmarkt’ or Strangers’ Market. One of the really authentic bars in town is called ‘Oud Arsenaal’ (Old Arsenal) and is situated in the Maria Pijpelinckxstraat. In case you didn’t know: Maria Pijpelinckx was Rubens’ mother, so it shouldn’t surprise you you can find this bar in the neighbourhood of the Rubens House Museum.

It has been a bar ever since 1924 and the building itself dates back to early 19th century. The starting date of the bar can still be read in the inscription above the door. The shop front has these orange-brown coloured ceramic tiles and probably the interior dates back to 1932. In that year a permit was granted to enlarge the café and at that moment the art-deco interior was installed, with its brown and yellow floor tiles, and its walls covered with wooden benches, mirrors and wooden wainscoting. 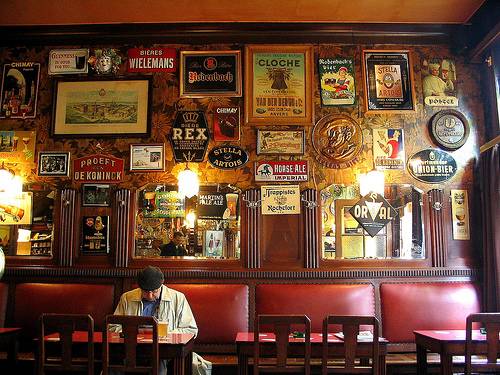 When you enter the cafe, you make a trip through time, going back nearly a hundred years. In 2009 a search was held to look for really authentic public bars and ‘Oud Arsenaal’ was selected as one of the top-locations.

And another reason to go there: Steph, the landlord, has a really impressive choice of fine beers from all over the country and that at very affordable prices.

Saturdays and Sundays a market (Vogeltjesmarkt) is being held in the immediate neighbourhood, that explains the early opening hours.

Dageraadplaats – off the beaten track

A very lively neighbourhood with a lot of bars and restaurants can be found at Dageraadplaats, which is the heart of Zurenborg. It may be little known by tourists, but is frequented by locals. This is an area where people of different origins live together, and it shows in the types of restaurants you can find at and around this little square.

The square can easily be reached by public transport (Line 11 has a stop at the square). Moreover, just a few steps away is Cogels-Osylei, a city quarter that was developed in the era of art nouveau and Jugendstil. Fortunately practically all of the houses in this street, and the sidestreets leading up to it, have been protected as monuments. It surely is a unique sight.

Soon I will tell you more about this fascinating area.