One of the most popular meeting places in town is at the feet of Rubens’ statue on the Groenplaats. This used to be a green churchyard (i.e. one without gravestones for ordinary people). But be assured: the bodies have long since been taken away and are now replaced by car that are parked in the garage underneath.

The statue was made by a local sculptor W. Geefs to commemorate the 200th anniversary of Rubens’ death in 1840. Unfortunately Geefs did not succeed in getting his sculpture ready in time. He cast a plaster copy and had it transported to the place it was supposed to stand originally: the Steenplein. Suddenly the casting slid from the carriage and was broken to pieces. Eventually it was three years later, in 1843, that the image was placed on the Groenplaats.

Again things didn’t go as planned: it had been raining quite heavily, the ground was soaked and a wheel slid into what had probably once been a grave. Rubens again fell to earth, but fortunately this time he was made of bronze and survived the drop.

Greefs portrayed Rubens in his three dimensions: as a gentleman, as a diplomat and as a painter. It seems that the previous aspects were more important to Greefs than his artistic side. His palette lies  behind his feet, together with a bag filled with documents. More prominent is the rich way he is dressed. It is clear this is not just anyone, on the contrary a very important person. Just watch the self confident way he stands there, the left hand carelessly resting on his sword, the right hand stretched out to bid us all welcome to his city. And maybe also to some his nicest works in the cathedral behind him.

Rubens does not face these works, neither does he look at his house and workshop. Instead he looks straight south. Might he be looking at Italy, where he perfected his craft as prof. Claes suggested in  his book “Van Mensen en Steden”?

More on W. Geefs can be found on Wikipedia. 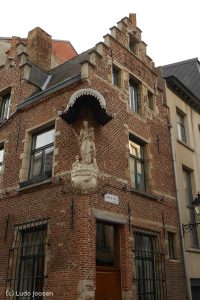