Rockoxhuis: another example of wealth from the Golden Age

Rockoxhuis: another example of wealth from the Golden Age 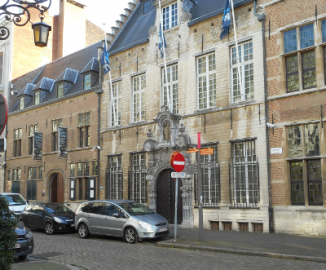 The mansion that was once occupied by mayor Nicholaas Rockox now houses a museum.

In the early 17th century Nicholaas Rockox bought two houses in the Keizerstraat and had them rebuilt into one large mansion with an inner court. Over the years the building changed appearance. It’s got a completely new facade early 18th century as one can still see in an inscription on top today: 1702.

Late 19th century  it was turned into an antique shop and each and every room was changed into the style of a particular period. Later on an artistic circle used the place for its activities, but these never really got off the ground. Except for one: the cellar that was used as a dancing. As the University was only a stone’s throw away, many student organisations used the cellar for their parties. But the overall building started to deteriorate and eventually Kredietbank, a financial institution bought the place with a dual purpose.

A Bank comes to the rescue

Kredietbank wanted to create a museum that restored the house to what it might have been like in Rockox’ time. Rockox was a fervent collector of art. Rubens was a personal friend of his, so in his collection featured a number of works of Rubens and his contemporaries. But also older artists were represented in the collection. This collection is now spread all over the world, so a new collection now adorns the walls of the museum.

Kredietbank also needed a place in Antwerp where it could receive guests and organise trainings for its personnel. So they not only bought Rockox’ house, but also the house of painter Snijders next to it.

More on the museum: https://www.rockoxhuis.be/en/

More on the exhibiton: https://www.rockoxhuis.be/en/exhibitions/now

2 Replies to “Rockoxhuis: another example of wealth from the Golden Age”